WHEY OR SOY PROTEINS? AND WHAT'S THE RIGHT INTAKE?

The best protein to be used before, during, and after exercise has been a subject of much discussion. We can assure you that Hammer Whey Protein is the premier choice for recovery and enhanced immune system function. At the same time, Hammer Soy Protein is ideal for fulfilling protein requirements before and during endurance exercise. We advise a combination of both soy and whey protein, applied at separate times, to give the most complete support for an endurance athlete's diet.

That doesn't mean that using soy protein for recovery purposes would be "wrong" or in any way harmful. But, to maximize the benefits, you'll not find a better protein for recovery and immune system than whey protein isolate, while for exercise-specific benefits, it's hard to get anything better than soy, which is why we use it in both Sustained Energy and Perpetuem.

THE BENEFITS OF SOY PROTEIN

Soy protein is the best choice before and during exercise due to its less potential than whey protein for producing ammonia (one of the leading causes of muscle fatigue). That alone would make soy the preferential choice during training, but soy has more benefits yet.

Soy protein has a unique amino acid profile that is attractive as the ideal protein for endurance exercise. Although not as concentrated as whey protein, soy protein still provides a substantial amount of branched-chain amino acids (BCAAs), which your body promptly converts to produce energy. BCAAs and glutamic acid (an amino acid present in significant quantity in soy protein) also aid in replenishing glutamine within the body, avoiding the risk of excessive ammonia production caused by orally ingested glutamine, usually added to whey protein.

Soy has high amounts of alanine and histidine, part of the beta-alanyl l-histidine dipeptide known as carnosine, known for its antioxidant and acid buffering benefits. Soy protein also holds a high level of aspartic acid, which plays a vital role in energy production via the Krebs cycle. Ultimately, soy protein has higher phenylalanine levels than whey, which may aid in maintaining vigilance during intense ultra-distance races.

For general health benefits, it's hard to find anything better than soy. Soy protein carries a multitude of beneficial phytochemicals. Scientific research has discovered many connections between soy consumption and lower rates of certain cancers (breast, prostate, stomach, lung, and colon). In China, medical researchers linked soymilk consumption to a 50% risk reduction for stomach cancer. Studies done in Hong Kong suggest that everyday soy consumption was a central factor in a 50% reduction in the incidence of lung cancer.

Hammer Soy is a solution to help you meet your daily protein requirements. Ideal for people over 40, soy protein carries several phytochemicals believed to support cardiovascular health, optimal cholesterol levels, osteoporosis prevention, and possibly cancer prevention. Same as all the Hammer Nutrition fuels, Hammer Soy is composed by the highest quality naturally derived ingredients. It contains no GMO soy and has no added sugars or artificial colours, flavours, or preservatives.

Add Hammer Soy to smoothies, juices, or other soy-based drinks to prepare a pleasing healthy meal. When making pancake or muffin batter, it's also a great addition, adding high quality, all-vegetable protein to the mixture.

THE BENEFITS OF WHEY PROTEIN

There's nothing more adapt than whey protein to enhance the recovery process. Whey protein has the greatest biological value (BV) of any protein source. BV measures the availability of the protein once ingested, and whey is found to be the most rapidly absorbed protein, precisely what your body craves after training. Whey protein's amino acid profile contains the highest percentage of essential amino acids, 25% of which are the BCAAs leucine, isoleucine, and valine, the most valuable t repair muscle tissue. Whey is also a great source of two other essential amino acids, methionine and cysteine, that stimulate the natural generation of glutathione, one of the body's most potent antioxidants and significantly crucial in maintaining a robust immune system. Glutathione also aids a proper liver function.

Each scoop of Hammer Whey contains 100% micro-filtered whey protein isolate, with no added fillers or artificial sweeteners or flavouring. Let's focus on this "isolate" thing. Producers provide two forms of whey, isolate and concentrate. Whey protein concentrate contains from 70% to 80% of the actual protein, the remainder being 30%/20% fat and lactose. On the other hand, isolate contains 90% - 97+% protein, with little, if any, lactose or fat, making it the purest form of whey protein available. 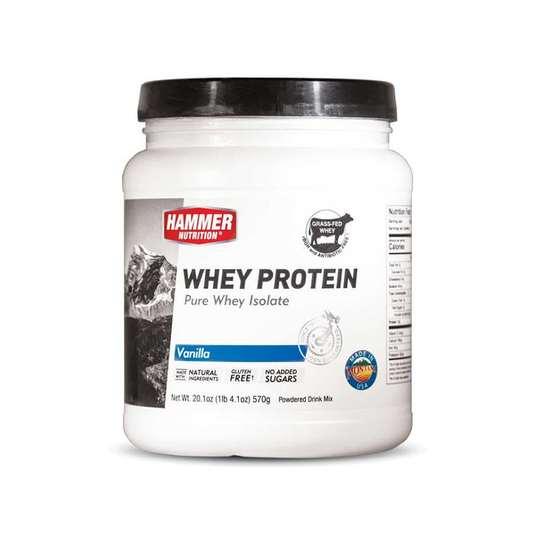 Since isolate contains almost zero lactose, even those with lactose intolerance find it an easily digestible protein source. In Hammer Whey and Recoverite, our whey products, we use only isolate whey.

In addition, each scoop of Hammer Whey contains 6 grams of glutamine, an exceptional amino acid. We could never stop writing about the benefits of this excellent, beneficial amino acid. Still, needless to say, it's essential for endurance athletes in supporting enhanced recovery and immune system function. Glutamine is the most copious amino acid in your muscles. Intense exercise depletes glutamine, which makes supplementation so necessary. Glutamine plays an important role in the glycogen synthesis process, and besides the branched-chain amino acids, glutamine helps repair and rebuild muscle tissue. In addition, glutamine assists raise endogenous levels of glutathione, which is deeply involved in immune system strength. Glutamine contributes to growth hormone release and is a crucial component of intestinal health.

"I'm an endurance athlete: how much protein do I need to consume?"

Studies have proved that endurance athletes in heavy training need more protein than recreational athletes. Not too long ago, it was believed that 1/2 gram of protein per pound (about .5 kilogram) of body weight-75 grams for a 150-lb (68 kg) person per day was sufficient. However, today's standards would increase that value to about 100-112 grams (2/3 to 3/4 grams of protein per pound of body weight).

To determine your requirement, multiply your weight in kilograms by 1.4 to 1.7, based on the intensity of your workout. This gives you the amount of protein (in grams) that you should consume daily. (To convert from pounds to kilograms, divide by 2.2). Thus, a 165-pound (75 kg) athlete in high training mode should consume about 128 grams of protein daily.

Obtaining adequate amounts of protein is undoubtedly crucial for endurance athletes. We hope you will be able to use this info to determine what kind of protein to use and how much, and start to benefit the athletic performance and overall health advantages that whey and soy proteins can give!