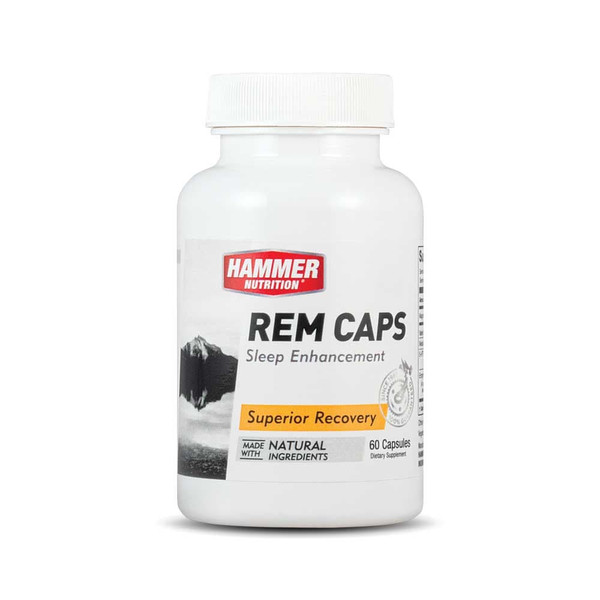 In today's stressful world, it's oftentimes difficult to obtain adequate sleep. Athletes engaged in hard training especially need the benefits of sound sleep to allow their bodies to recover. Don't let an insufficient amount of quality sleep compromise your health and sabotage everything you've worked so hard to achieve in your training. REM Caps' nutrient combination allows you to reap the health and performance benefits of a more sound, restful, and productive sleep. If you're looking for a safe, effective sleep aid, look no further, just add REM Caps to your next order.

Take 1-2 capsules one hour before bedtime.

Melatonin - Melatonin is a hormone that is naturally produced and secreted by the pineal gland, a tiny organ in the brain. Melatonin is responsible for regulating the biological rhythms in humans and is an effective aid to alleviate insomnia. It is also a very powerful antioxidant. One well-known nutritionist has stated that melatonin is "one of the most powerful antioxidants ever discovered - with a greater range of effectiveness than vitamin C, vitamin E, or beta-carotene..." Another respected nutritionist writes, "melatonin neutralizes one of the most damaging free radicals, and does so five times more effectively than the antioxidant enzyme glutathione..." Due to its antioxidant benefits melatonin has been shown to be a powerful immune system stimulator, with the potential for helping to prevent certain cancers.

5-HTP (5-Hydroxy tryptophan) - 5-HTP is isolated from the seed of a plant called Griffonia simplicifolia and is a natural precursor of the hormone serotonin that, along with melatonin and valerian, helps to prevent insomnia. Along with melatonin, 5-HTP also enhances the release of growth hormone during sleep. In addition, several other low-serotonin-level conditions are aided by the use of 5-HTP:

Magnesium (as Amino Acid Chelate) - Of the many roles magnesium plays in the body, one of the primary benefits for aiding sleep is that it helps the muscles to relax. Along with the valerian component in REM Caps, magnesium can provide real benefits for anyone suffering from night cramping.

Enzyme Enhancement System™ - (proprietary blend of protease, amylase, cellulase, lipase, phytase) The aging process can deplete/diminish the amounts of digestive enzymes the body produces. Adding enzymes to products works with the body, replenishing what it no longer can provide, and help a person absorb and assimilate the maximal amount possible.