Mito Caps are energy-boosting supplements that support mitochondrial health. Mitochondria are the thousands of energy-producing "furnaces" in your cells. The longer you can stimulate the lifespan or health of the mitochondria, the better you will perform in endurance events. The athlete who has the most healthy/efficient mitochondria is the one who performs at their best. Next to an energy boost, improved brain health and function are additional benefits you may expect from Mito Caps.

R-Alpha Lipoic Acid (R-ALA) is often defined the "universal antioxidant" because, unlike other antioxidants, it scavenges both water and fat-soluble free radicals.

Note: Use daily with Race Caps Supreme and Premium Insurance Caps for maximal benefits. All these products are included in our Daily Essentials Kit.

The unique Mito Caps formula maximizes the efficiency of energy production at the cellular level by supporting and protecting mitochondria, whose purpose is to produce energy in your cells. The result is an energy boost that will accompany you during your daily life and competitions. This product neutralises free radicals and fights age-related degeneration.

Prepare yourself for a sense of stable health and wellness that will remind you of your youth. The cumulative benefits supplied by Mito Caps, such as improved brain function, constant energy to rely on, and a feeling of good general health, will positively affect every aspect of your performance and life.

Acetyl L-Carnitine – L-carnitine is a derivative of the amino acid lysine which has been found to restore key elements of mitochondrial energy production and cellular health. Additionally, it serves as the most important link in the production of energy from carbohydrates, protein (amino acids), and fats at the cellular level. It also helps to preserve lean muscle tissue by decreasing excess levels of cortisol.

R-Alpha Lipoic Acid (R-ALA) – Is an essential cofactor for several multi-enzyme complexes that increase critical energy metabolism reactions inside the mitochondria of cells.

Commonly known as the “universal antioxidant,” R-ALA functions as both a water and fat-soluble antioxidant. For this reason, it is able to neutralize a wider variety of free radicals than any other, including those created by excess free metal ions such as iron and copper. It also plays a role in the regeneration of “used up” or oxidized antioxidants such as vitamins C & E, CoQ10, and glutathione, thus extending their capabilities.

DMAE – Dimethylaminoethanol (DMAE) bitartrate stimulates the production of choline, which in turn allows the brain to optimize production of acetylcholine, a neurotransmitter involved in learning and memory. DMAE also enhances the function of acetyl L-carnitine and R-alpha lipoic acid.

Para-amino Benzoic Acid (PABA) – This intricate B-complex vitamin plays an important role in the formation of red blood cells and also functions as an antioxidant. While a potent nutrient in its own right, its primary role in this formula is to multiply and enhance the effects of acetyl L-carnitine and R-alpha lipoic acid.

Vitamin E & Vitamin B6 – Powerful antioxidants that help neutralize the free radicals naturally produced during energy production. These vitamins have numerous additional health benefits pertaining to the cardiovascular and circulatory systems, and support healthy energy production. They are included in this formula specifically to assist in the body’s use of DMAE and PABA.

Ascorbyl Palmitate – A non-acidic, fat-soluble form of vitamin C that has the ability to reach specific areas of tissue that standard vitamin C cannot. In addition to its antioxidant properties, ascorbyl palmitate enhances the bioavailability of carnitine.

Proprietary Enzyme Blend (amylase, lipase, and protease) – These enzymes help maximize absorption of all the nutrients in the product. 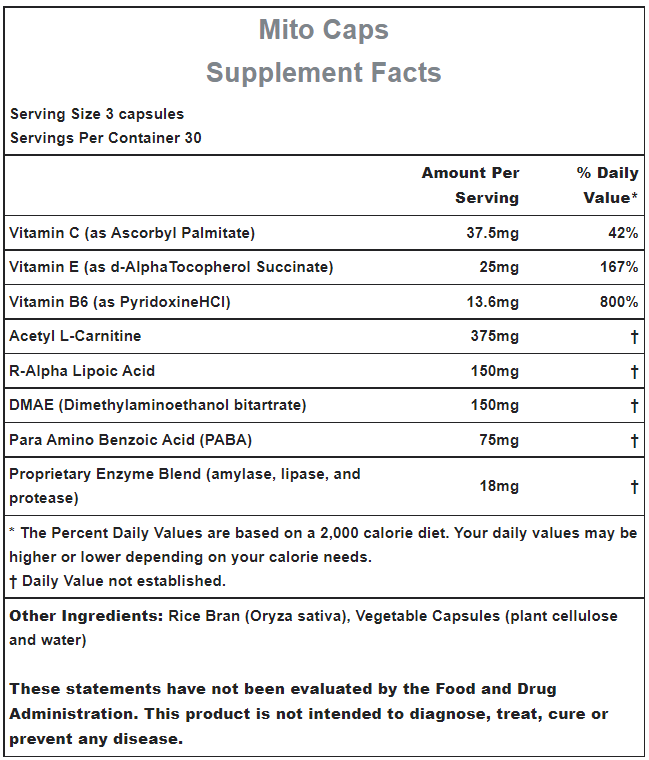